The City’s police operations were previously housed in a series of trailers and modular buildings. The new facility contains administrative offices, evidence processing and storage, cells for both juveniles and adults, a firing range, K-9 facilities, and support rooms.

The new station is the first building within the new civic and retail area being developed by the City. The Arrington Watkins team’s design not only met the requirements of the Police Department, but also fit the aesthetic character of the new civic development. 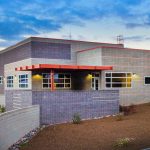 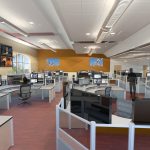 City of Goodyear 911 Call CenterEmergency Communications, Public Safety
About Us
Arrington Watkins Architects was founded in 1994 with a sharp vision of creating a different kind of design firm, one that would focus on the needs, goals, and successes of clients. We are a medium size firm with a diversely .... read more
Contact Info
5240 North 16th Street, Suite 101, Phoenix, Arizona 85016
Telephone: 602.279.4373
Fax: 602.279.9110