The penitentiary is the high-security portion of the 650,000 SF project, consisting of living units and support facilities for 960 inmates. The compound includes several one and two-store buildings, a Federal Prison Industry (UNICOR) factory, educational and vocational facilities, six general housing units, and one special housing unit.

The prison camp is located outside the secure compound and provides living units and support facilities for an additional 128 inmates. A Central Shared Facility, which is comprised of general and UNICOR warehouses, a garage/landscape building, a fueling station, and a hazardous material building, is also located outside the compound.

Situated on a 660-acre site, actual construction at the penitentiary and prison camp occupies 217 acres. 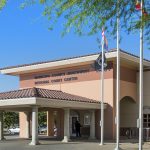 Maricopa County Northwest Regional Court CenterCourts, Justice
About Us
Arrington Watkins Architects was founded in 1994 with a sharp vision of creating a different kind of design firm, one that would focus on the needs, goals, and successes of clients. We are a medium size firm with a diversely .... read more
Contact Info
5240 North 16th Street, Suite 101, Phoenix, Arizona 85016
Telephone: 602.279.4373
Fax: 602.279.9110